Site costs are the costs of preparing your block of land for building. But how can you make sure that site costs won't blow your budget?  Gaining an understanding of site costs and how they're determined is a good place to start.  Read on as we share our inside knoweldge on the true price of site costs.  It's a long article but possibly one of the most valuable you'll ever read if you're building a new home in Australia today.

It may seem strange, but the type of soil is important as it determines the level of engineering on the slab on which you can build your home. Far from being ‘just a slab of concrete’, the slab is highly engineered and the type of slab you need depends entirely on the environment in which it will sit. Things like rock, clay, sand and soil content can affect movement in the ground, thus the type of slab required, which in turn determines site costs. On all accounts it will be necessary to have the soil tested to check on these factors, which will determine the nature of your concrete slab design.
Before any builder can give you an accurate estimate of site costs they must first know the soil type of the land they are quoting you to build on.
In keeping with best practises for comparing apples with apples we advise that once you find your perfect block of land that you obtain your own soil test by a surveyor which may cost you around five hundred dollars.  That way there'll be no excuse for a builder to underquote you for site costs which often leads to disappointment later when the final cost may be substantially higher.

This is interesting to help you gain an understanding of why soil tests determine the footing and slab design of your home.

Most sand and rock sites with little or no ground movement caused by moisture changes.

Filled Sites.  This class refers to sites which include fills such as such as clay, silts or loose sands; landslip; mont subsidence; collapsing soils; soil subject to erosion; reactive sites subject to abnormal moisture conditions or sites which cannot be classed otherwise.

Some of the site excavation work may have been done prior to the land being offered for sale. But if not, you or your builder can make your own enquiries about what the costs to level the site might be. It may be possible to negotiate these costs with the developer.

Excavation costs can be expensive, but if you get the right advice early on you need not blow your budget.

Whilst rare, in some cases developers will agree to contribute to or even include site levelling in the purchase price. If site costs present a significant hurdle for you it might be a negotiation worth having with the developer.  Or if you are working with a land buyers advocate this is something they would negotiate on your behalf.

In many regards buying a sloping block is warranted however it's vital you consider the following levelling options.

This is an area where caution is advised. Filling a sloping block requires a guarantee of stability and the quality of retainment must be exceptional.  You might be looking to purchase a block that's already been filled and in which case you have no idea of what fill materials have been used.

A filled block is classified as P class.  This class refers to sites which include fills such as such as clay, silts or loose sands; landslip; mine subsidence; collapsing soils; soil subject to erosion; reactive sites subject to abnormal moisture conditions or sites which cannot be classed otherwise.

The stability needs to be guaranteed by drilling down into the natural ground level, not just the newly created soil level which could prove to be costly.

You can see from the picture below that even when a site is filled (opposed to cut) that it may still require significant retainment costs).  Sadly, many people are not aware that they'll need to deal with a site fill requirement until their builder is long gone.  In my opinion, retainment costs of a filled block is one of the most significant unexpected hidden costs of building.  This is one reason why we prefer to perform a site cut rather than a site fill.  At least that way, you know what your true costs are from the beginning.

In the photo below this site fill is on the boundary.  Hopefully the owner was made aware by their builder that they will be legally accountable for the full costs of the retainment wall given that they are the ones who have altered the natural ground level.  Their neighbours will only be legally liable to contribute half the cost of a standard paling fence. 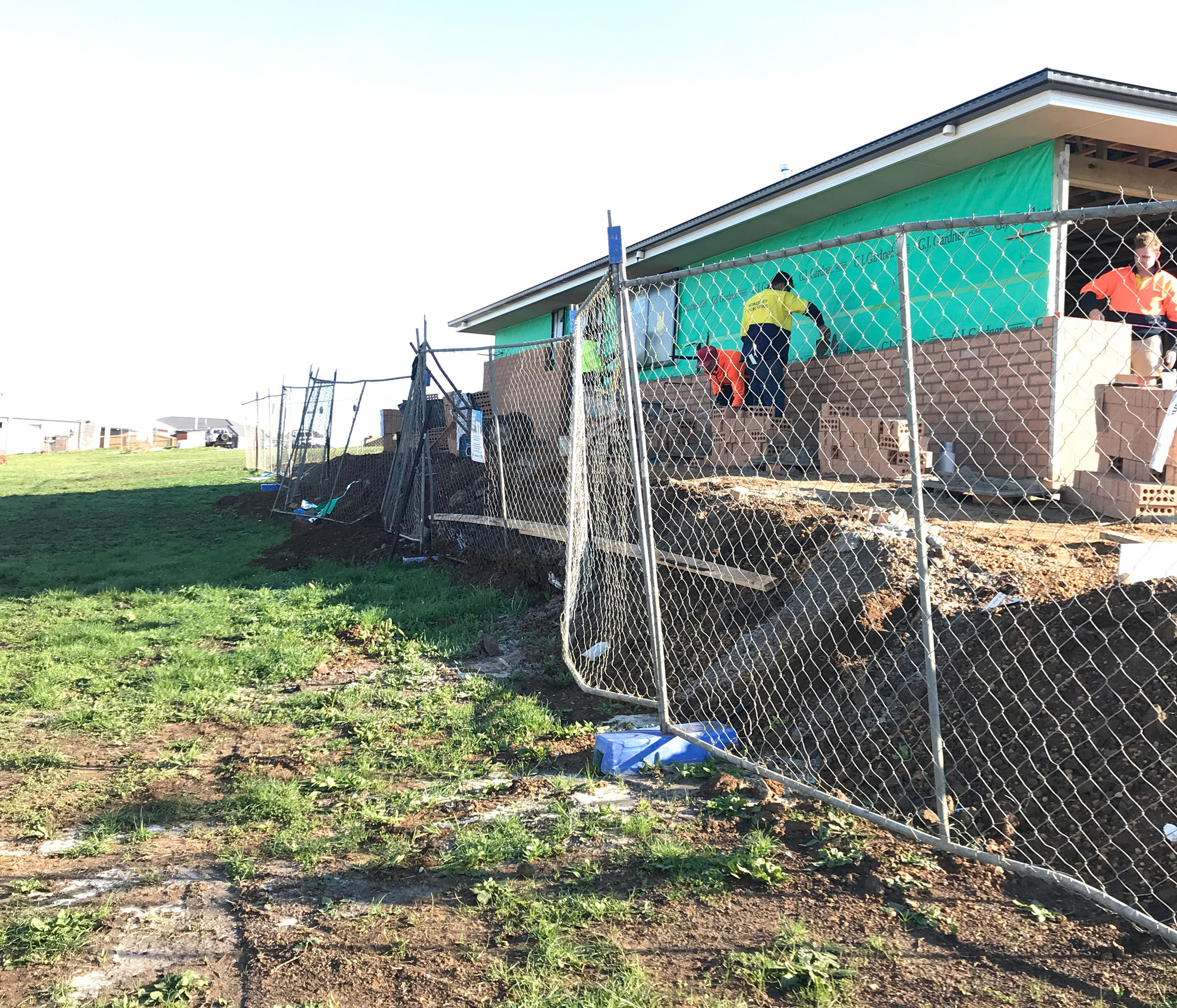 The cost of this operation will vary depending on the amount of earth to be removed, as well as the ground composition. Obviously, removing rock is far more expensive than removing soft, fertile soil. You are strongly advised to seek the advice of a civil contractor, who will be able to give you a quote. If possible, you should try to negotiate the site levelling costs into the purchase price of the block to avoid budget blow-outs. Some developers won't be open to this, but others might be open to negotiation, depending on their motivation to sell.

A land buying advocate can assist you with all your site levelling concerns.  I always like to get an independent quote on what it will cost me to level the site rather than rely solely on a builder to price it in as an inclusion.  That however is up to you.  Some people like the convenience of leaving it all up to the builder.

The image below shows how an alternative to installing expensive retaining walls may be to create a 'batter' down to the natural ground level.  Take note of the very back of the block.  Losing 2 meters of backyard in battered garden bed has saved them around $20,000 in retainment costs.

The image below shows an excellent example of where property owners have saved huge retainment costs by battering the land and using boulders in forming the landscaping. 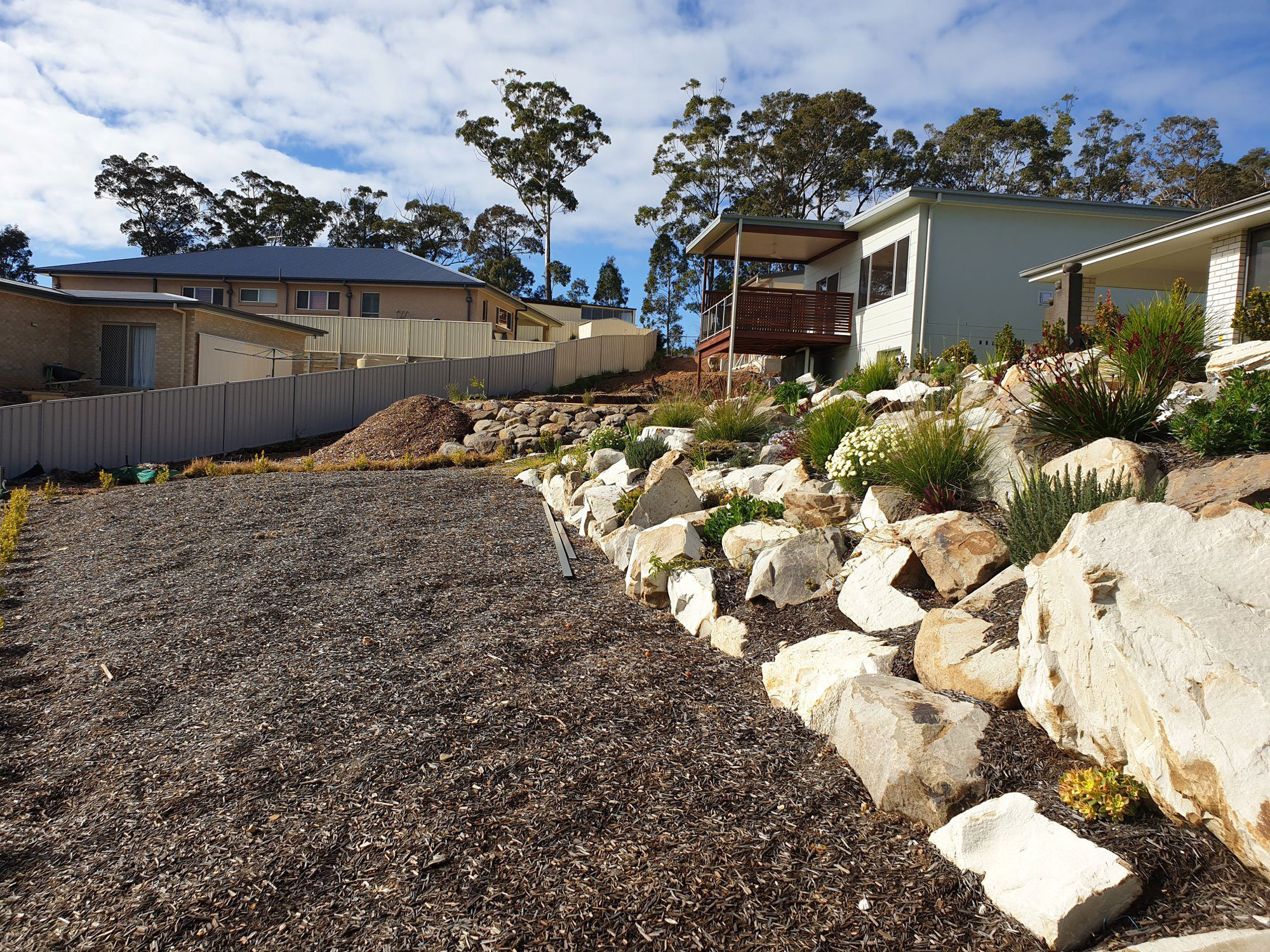 An alternative to site cut or fill

Most project builders will require that you build on a concrete slab.  Therefore a site cut or site fill is required.  However there is another option which a custom builder can easily accommodate.  The video below shows a home I recently had built.  For relatively no extra cost I created $10,000-$15,000 in extra value as building straight out on concrete piers (rather than digging down and building on flat slab) gave me elevated panoramic views of parkland that would otherwise not have been visible.

The video below shows a full retainment which came at an expense of approximately $25,000.  This block however had been priced accordingly to allow for the site costs  the purchaser incurred.  ie.  The purchase price was $25,000 less that surrounding blocks that required little or no retainment.

See further examples of retaining walls over a variety of scenarios. 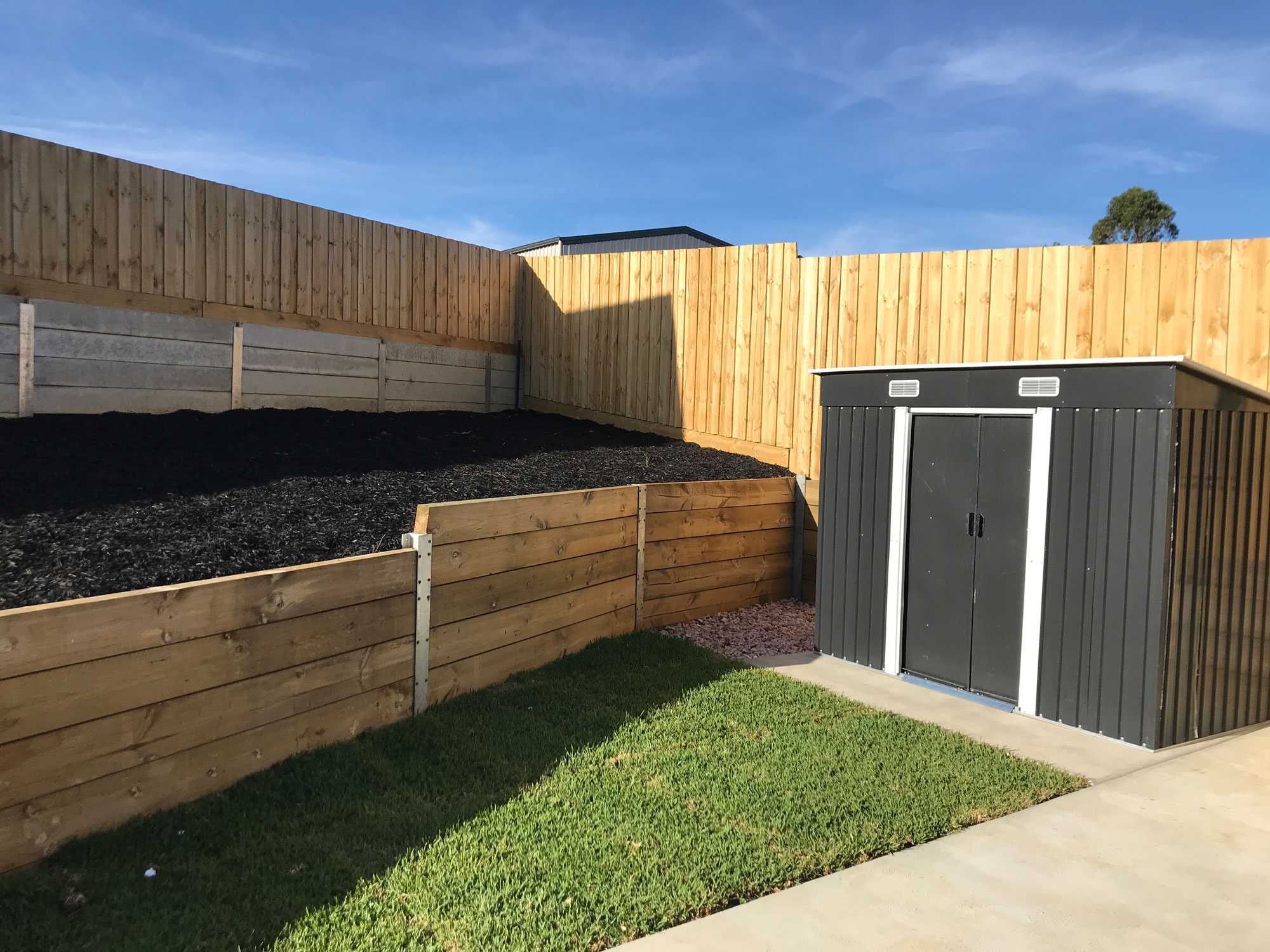 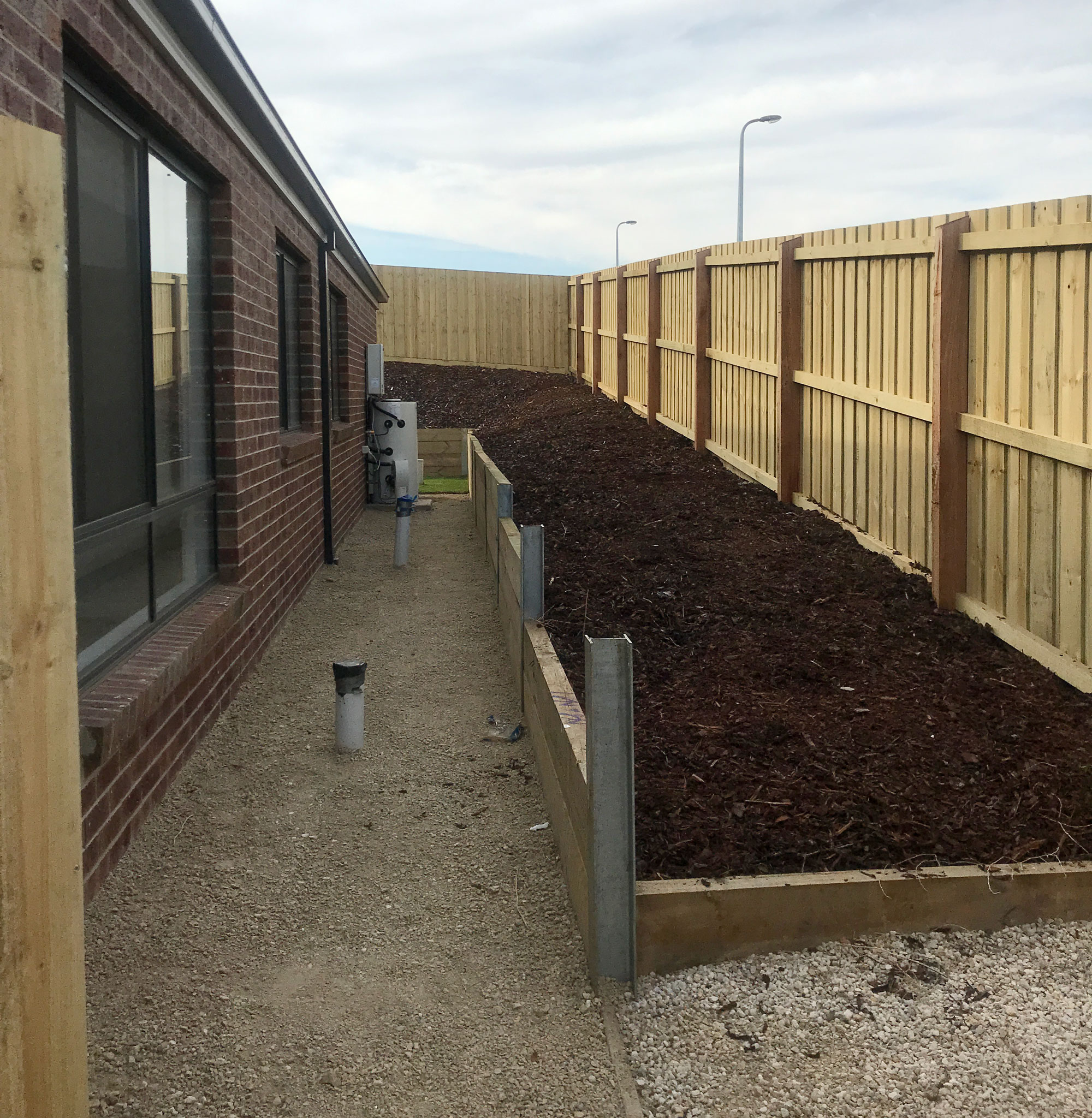 Retaining my own home

The below image shows the back of my own home.  The front of my home is on the natural ground level yet the back of my home was built into the side of the hill.  We retained the back section using concrete blocks that we later rendered.  You can see that the right side of the home is retained whilst the left side sits on natural ground level.  Purchasing a block on a hill did pose limitations sure, but it also enabled us to capture 180 degree views as far as the eye can see. 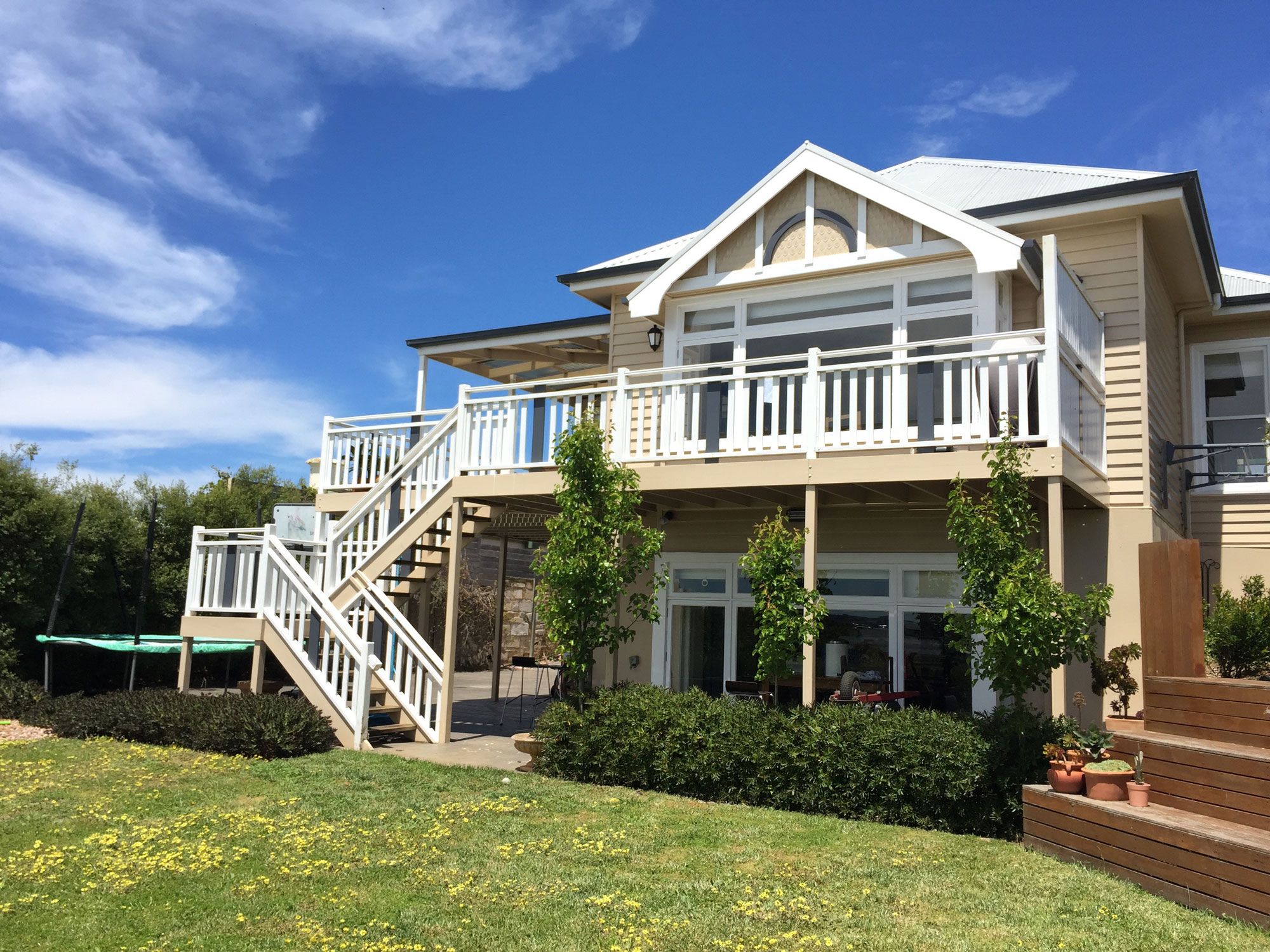 Another examples of a home built into a hill side 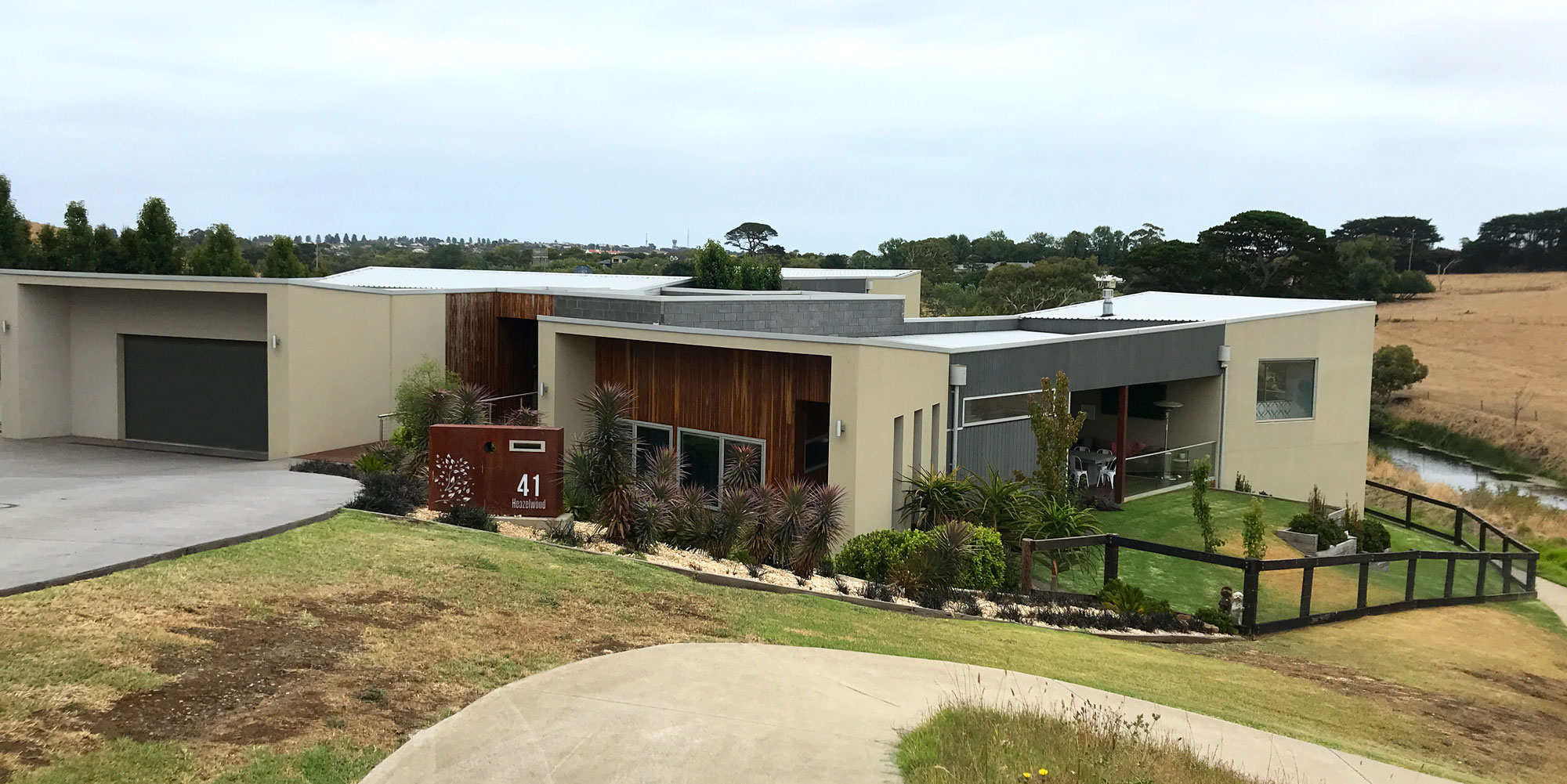 Following a recent talk I gave at a First Home Owners Information night I was approached by a young couple from the city to had moved to regional Victoria as a lifestyle choice.  They told me that they were in negotiations to purchase a 750m2 block and that they had an overall budget of $350,000.

I quickly did the math in my head and knew something was wrong.  A 750m2 block close to the CBD?  How were they possibly going to afford to build on that given that a block of that description in that particular area would be around the $160-$180k mark.  That would leave them with a $190k building budget at best without even taking into account other miscellaneous costs such as fencing, landscaping etc.  Impossible I thought to myself.

They then excitedly went on to say that they had got a bargain and with delight in their eyes they went on to tell me that they  were purchasing the block from a real estate agent for just $115,000.  Red flag right there.  They didn't know... how could they possibly know... THE GOLDEN RULE;  If you find a cheap block, there is always a reason why.  You NEED to find out what it is.

After further investigation I found out what it was.  I realised I knew the area quite well, at least well enough to know that the entire subdivision is build on sandstone and that their block had the steepest slope of all on it.

The excavation costs to dig into the slope given that we were dealing with sandstone would have been astronomical.  Not to mention that they would have only had the one option of building a double story which would add significantly more cost to their build.

Thankfully, this couple met me just in time and did not sign the contract as planned the following day.  Fate saw us come together to save them from making the biggest and most costly mistake of their life.